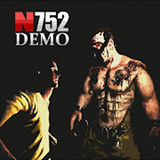 In this demo there is a reference to inmate N°877, who is 3 meters tall and weighs about 300 kg, an unprecedented strength, silent and fast enough.

But we want to clarify that the demo itself is not similar to the full game, in the demo there are different paths and limited places.

We give the opportunity to try this demo to give you a taste of the full game, but it will not be similar, both in the path and in the position of some monsters, and in some puzzles!

The game will take place in the underground sewers of the island and in the military department, where it all started with the horrific experiments conducted by the state in collaboration with the army and some scientists. The experiments are aimed at improving the human body and creating the perfect soldier.

In the first chapter Abram awakens in his cell in the isolation zone, where he was sedated by the guards.

After managing to get out of area 1, and escape from inmate N°752 in the second chapter he finds himself in zone 2 where he will have to overcome many obstacles and go through all the penitentiary and maximum security psychiatry, to finish in the third chapter which, as we have already said, will take place in area 5 and in the underground sewers of the island.

Are you cold-blooded? begins survival and helps Abram return to his family and prove his innocence.

ATTENTION, THE DEVICES WITH LOWER FEATURES OF THE EXPECTED ARE NOT SUITABLE FOR THIS GAME! CHECK YOUR SPECIFICATIONS OF YOUR DEVICE. THE OBSOLETE AND LOW-BAND DEVICES ARE NOT SUPPORTED, THEY CAN GIVE COMPATIBLE PROBLEMS.

* Only available for devices with Android 7.0 or higher and OpenGL 3 or higher. The game requires Arm v7 or arm64-v8a. A minimum of 4 GB of RAM and 4 CPUs, Better 8 CPUs. (Minimum 1GB free storage memory).

GPU (Imagination Tech PowerVR) Not supported. Can slow down.

We recommend mid-to-high-end devices of the latest generation and with the minimum features listed above for an optimal gaming experience. Low-end, outdated devices can alter the graphics experience and affect gameplay, or even be incompatible.